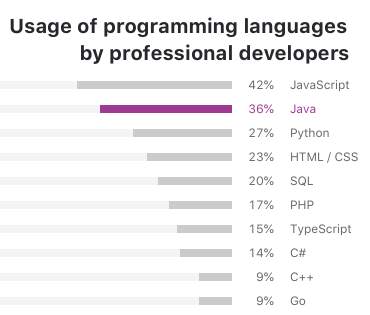 Java celebrated its 25th birthday earlier this year and has subsequently seen the general availability of Java 15. Judged to be the second most used programming language, surpassed only by JavaScript, it is estimated to be regularly used by 6.8 million professional developers worldwide. JetBrains provides an up-to-date picture of Java users and usage,

JetBrains, which ran an online Java Technology Day in July, the recording of which can be seen here, has a special interest in the language because of its flagship product, the IntelliJ Idea IDE. A  recent post on the JetBrains blog came from Valeriia Karpenko and provides A Picture of Java in 2020 the gives us a lot of information about Java developers and the state of the Java ecosystem.

According to JetBrains State of the Developer Ecosystem Survey 2020, which is the source of this data, more than a third of professional developers use Java as a primary language:

Java remains the second primary language among professional developers and of its survey of almost 20,000 developers, 70 per cent had used Java in the past year.

In her analysis of where Java developers are based, Valeriia Karpenko cites the Developer Estimation Model by the Market Research and Analytics Team which provides the statistic that, worldwide there about 5.2 million professional developers who currently use Java as a primary language and Asia is where there is the largest concentration as this map reveals: 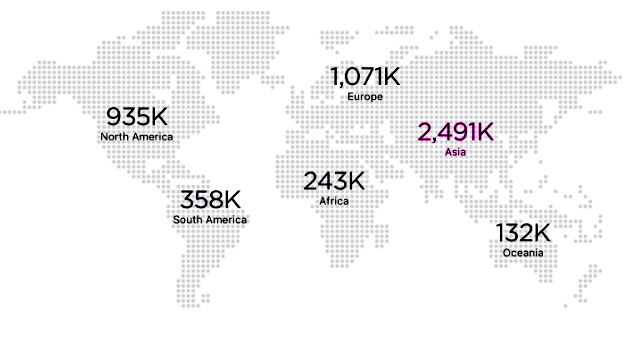 At a country level it is China and South Korea that have the highest proportion of Java usage, around a half, whereas it’s only a third in the United States and the United Kingdom: 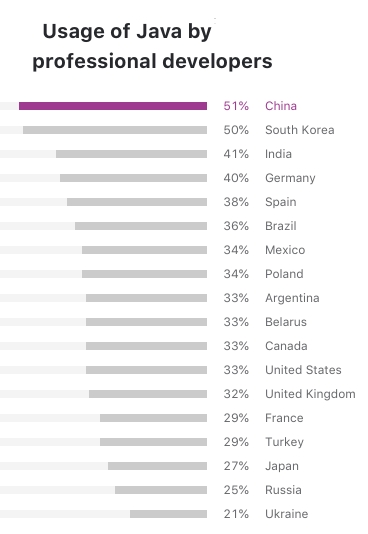 The reasons Java is most likely so popular in the first 6 countries include the free use of Java, governmental support, and open-source. This is especially the case for China, Spain, and Brazil. It is the base for Android mobile development in China and India, and hiring offshore staff to build phone apps in Java is very widespread which could account for the peak in use for India. Germany is also very high which could be attributed to Java being the most popular language in Germany for software engineers as it is used to build highly scalable applications for a multitude of industries.

She also points out a good reason for the lower usage in the USA:

There is a big technology stack to choose from and often a lot of the tech companies are at the forefront of that stack, so it could be that developers there don’t need the power or stability of Java and are using languages that allow them to build and test quickly.

So what do professional developers do with Java? And which industries do they work in? In both these tables the percentages add up to between 200 and 300% so the instruction was presumably, “Select up to three”: 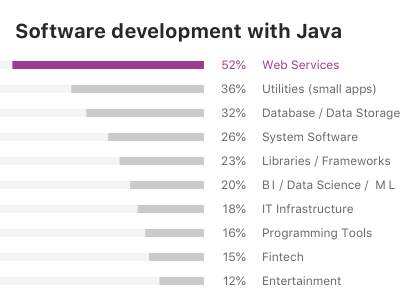 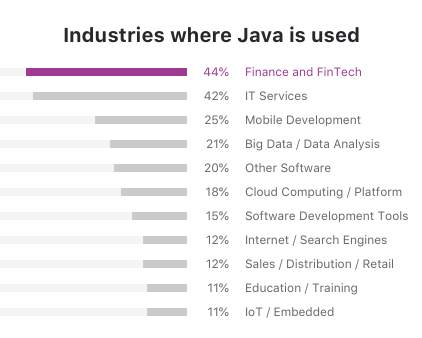 Taking these two table together suggests that bank and other financial institution websites and in-house IT services, from inventory management, through payroll systems, might account for a lot of Java developers.  Android devs creating apps might also be popular. These are certainly familiar stereotypes. Trisha Gee singles out the 20% BI / Data Science / ML as worthy of comment saying:

It’s surprising to see Java so prevalent in Business intelligence / Data Science / Machine Learning, as you’d think this would be the realm of Python.

I don’t find this surprisingly high as they are so dependent of databases, another area traditionally a stronghold for Java.

Moving on to the How, there’s data on Java versions and the tools used by Java Developers. 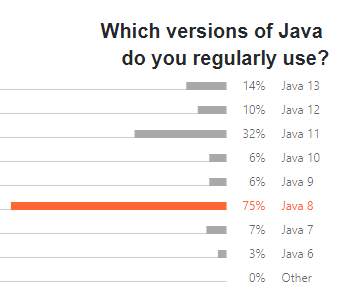 There are a few factors contributing to why Java 8 is so popular. Firstly, it has everything a typical Java developer needs from the language, it has lambdas and streams and it is generally a nice easy version to use. Also, people have been really reluctant to move to Java 9. Java 9 introduced some big architectural changes and people are scared these changes will break their applications that are built in Java 8. On top of this, Oracle introduced bi-yearly releases, and so not all releases are supported for a long time so Java 9, Java 10, Java 12, and Java 13 are only supported for 6 months, which is probably why they all have such a very small number of users. Java 13 is only as high as it is because when this survey was out it was the newest version, and so you can expect the numbers to drop in a few months.

Spring Boot is easily the most popular web framework, used by 61% of Java Developers and Spring MVC is used by 42%. When it comes to application servers Apache Tomcat is  used by 62% and when it comes to IDE or editor IntelliJ IDEA is used by 75%: 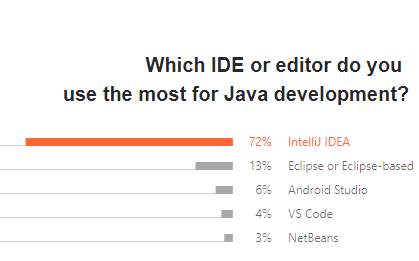 Even allowing for bias – the survey was conducted by JetBrains and so you might expect use of its product to be over-represented by respondents – this is a convincing finding.

Celebrate 25 Years of Java With JetBrains

The True State of Java and its Ecosystem

The Story Of Java – A Language Of The 90s

How is Java Doing?